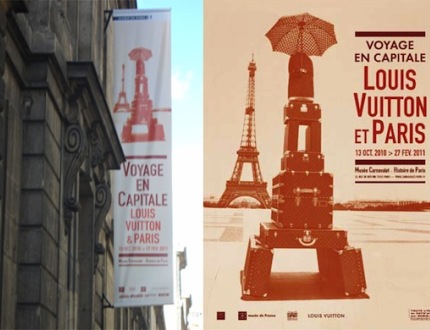 Any trendy Parisian travels, in fact, I’m willing to bet that the average Parisian spends more days a year escaping the city than they do in it, but boy do they survive in style. Last weekend I paid a visit to the Musée Carnavalet in the Marais (the painfully chic gay district of Paris) to see their current Louis Vuitton exhibition.

‘Voyage en Capitale’ was small, understated and brimming with French and Italian fanatics, (at least half of whom were bearing the LV monogram themselves), the exhibition dealt mainly with luggage and celebrated the art of travel, for the French, it is, of course, an art.

Indeed, I had not known that the Vuitton family were an engineering family, not originally, but once Louis had established himself as a luxury luggage designer, his family went on to develop the travel industry around him, I wonder if it was all part of one enormous game plan. Either way, you have to hand it to them, the family created and developed a business and industry around themselves and were vastly underestimated as influences over the way we travel today (you see how much a fashion exhibition teaches you? Not just for looking at pretty things!).

Of course, nowadays international travel isn’t really by train and so these beautifully crafted trunks have become somewhat defunct, these days we favour wheels and thick leather rather than square corners and a light wooden frame; air travel and the concept of ‘hand luggage’ has revolutionised the way we travel. As much as I fell in love with the vintage trunks, I feel that for hopping back home to the UK, I would far rather throw my Mulberry Piccadilly over my shoulder than struggle to throw an oversized box down the stairs and into a cab, and this is something the Parisians and I agree on (finally!).

The French are really yet to sink their teeth into Mulberry, but Longchamp is a big luggage name here, of course, those that can afford it are still heading for Louis Vuitton (who during sales on the Champs-Elysées employ security, provide an area for queuing and limit your daily purchases) but your average Jo opts for something a little less flashy.

As serial travellers the Parisians know it’s all about practicality. The dimensions of a large handbag will be checked against airline regulations before purchasing, anything bigger than handbag size must have wheels (and of course, if it comes in patent black then so much the better). “Function over fashion????!” I hear you cry, and well “yes, but… only this time, sssh”

About the Author:
Darcy Nicholson is officially now (as deemed by Marie Claire) a ‘par-don’, living the glamorous life of a Londoner in Paris; from this perspective, she comments on the life and times of French fashion, the legend, and the reality. She suffers through shops, bars, and the streets in between to bring you the news on what is a la mode.